A logo of the 2022 NFL football draft is projected at the Fountains of Bellagio on Wednesday, April 27, 2022, in Las Vegas, the day before the draft.

We’re in the middle of what could be a record-breaking weekend for Las Vegas on all fronts. From worldwide exposure to visitor attendance and tourism dollars spent, the city’s first NFL Draft is a big score for local business.

After the pandemic caused the draft to go virtual in 2020, there’s even more excitement surrounding this three-day football festival. 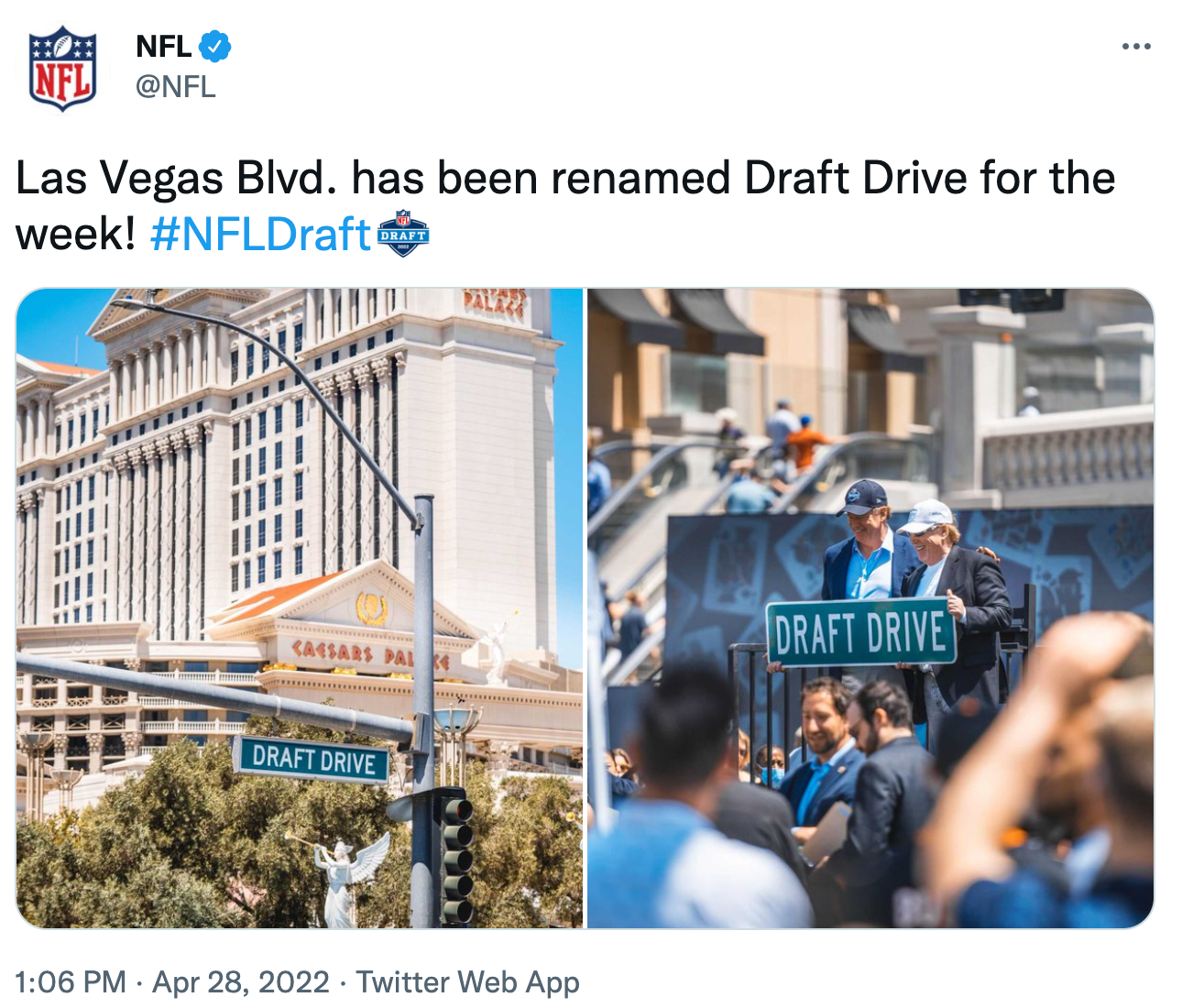 KNPR's State of Nevada was live on location at Circa's Stadium Swim in downtown Las Vegas where many visitors are watching the draft in six pools, over three levels, on a 40-foot HD screen.

Seven years ago, the NFL Draft would have been impossible in Las Vegas. Lori Nelson-Kraft with the Las Vegas Convention and Visitors Authority said it "has been a Herculean effort" to put on the event, but "it's been amazing to be a part of this."

Las Vegas is the first city ever to have secured the NFL Draft, Pro Bowl and Super Bowl.

"You're looking at two [NFL Draft] events ... here in person where NFL gets to connect with fans ... and that worldwide television exposure is unlike anything we've seen," Nelson-Kraft said.

There could be upward of 1 million visitors in Las Vegas for the event, and more than 1,500 media members were credentialed.

Chris Wilberding, the VIP manager of Stadium Swim at Circa, said they've been selling out, "especially for events like this."

He said many of the draft picks and NFL players were staying at the downtown property.

On the Strip, there was a lot of safety planning.

Las Vegas Metropolitan Police Deputy Chief Jim Seebock said the planning "has been going on for this for several years ... we were able to take some of the plans in place and put them into practice."

Several streets on and around the Strip were shut down this weekend, and that was done in coordination of police, Clark County and the NFL.

"The NFL has been a great partner," Seebock said. "Our goal is to make every event as safe as possible."

Several members of the police department attended the last Super Bowl to "take notes" on the safety preparations, he said.

The draft, for the players, is "life-changing," said Michael Pritchard, a host on VSIN, Rancho High School grad and former NFL player. "Not only for me, but for my family."

His colleague at VSIN, host of "Follow the Money," Mitch Moss, said it's also been huge for sports betting.

"People love to bet on sports," he said. In October, Nevada became the second state to pass $1 billion in monthly sports betting handle.

'Not a cookie-cutter event': NFL Draft goes all in on Las Vegas

Mitch Moss On The Las Vegas Version Of The NFL Draft