Nevada groups, officials go to work on protecting abortion rights, but what about other rights?

Thousands protest in Reno in June 2022.

Roe vs. Wade, the Supreme Court case which established a federal right to an abortion, was considered settled law for nearly fifty years. The decade's old precedence was overturned last week by a 6-3 decision of the court that found women do not have a constitutional right to an abortion.

In response, thousands of Nevadans took to the streets over the weekend to protest that decision. Many of the demonstrators expressed anger and disbelief at the ruling.

Others questioned where the abortion rights movement goes from here? And what other rights are at stake?

Horror, shock, sadness and anxiety were just some of the emotions expressed as thousands protested the court's decision in Dobbs v. Jackson Women's Health.

And as demonstrators marched through the streets of downtown Reno from the federal courthouse to the Reno arch, several blocks away, they let everyone know they were also angry. 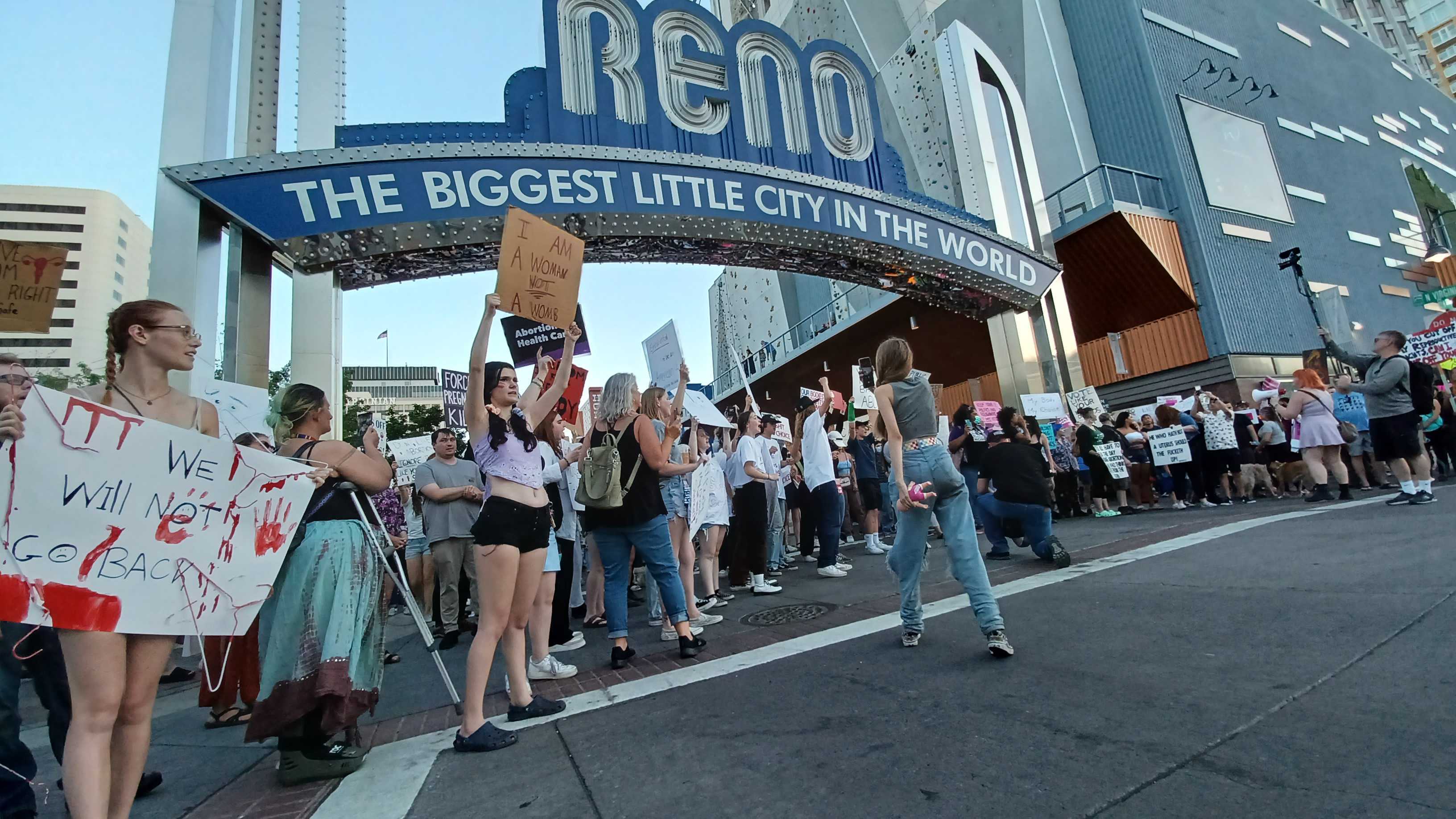 For many, there was a sense of loss, too.

Near the end of the procession, DJ Paso pulls a wagon with her 2-year-old girl sitting inside. Her 10-year-old daughter marches just a few paces ahead. Paso had her first daughter while she was still a teen. She says it was her choice.

The scene was much the same across the country, with people holding demonstrations every day since the decision. 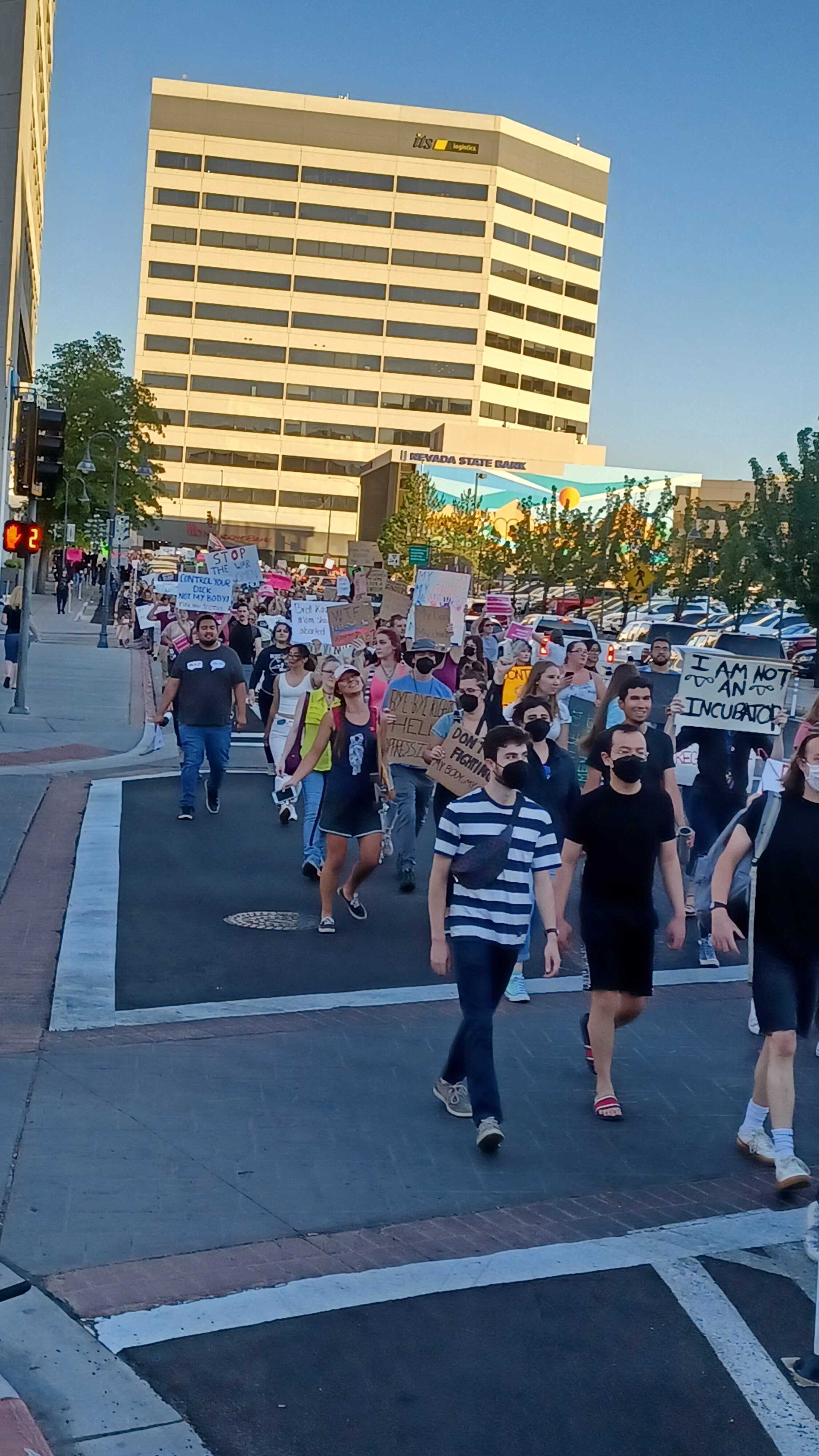 In Las Vegas, hundreds of protesters gathered outside the U.S. Federal Courthouse last week, holding signs reading, "My body, my choice" and "abortion is healthcare."

Annette Magnus, the executive director of Battle Born Progress, was among those who spoke to the crowd.

“We need to say absolutely not! Hell no, we are not going back in Nevada. We are Battle Born," Magnus said. "We are a pro-choice state. We believe in a person's right to choose whatever it is for their body.”

Voters in Nevada voted to protect the right to an abortion up to 24 weeks in the early 1990s. It's one of 16 states where state law guarantees abortion access.

That could make Nevada a destination for women seeking abortion services.

Trigger laws in Utah and Idaho have already gone into effect, banning abortions outright. Arizona lawmakers approved a ban on abortions after 15 weeks earlier this year.

But, Athar Haseebullah with the ACLU of Nevada said it may not be enough.

"What's to preclude anyone from moving forward?" he said. "This isn't codified into law. And so these are temporary measures. I commend the governor for taking the step, but with a part-time legislature that convenes for 120 days during every odd year, that protection is not permanently in place. And so there's a lot that could happen here with this particular issue."

Other groups are already working to help women in need:

“We've seen callers coming in from Utah, Arizona and Mississippi, in addition to Texas, so this is before the Roe ruling, before Dobbs, has come down and we only expect it to worsen," Caitlyn Caruso with the Wild West Access Fund said. They are a group dedicated to helping women access abortion no matter where they live.

However, it's not solely abortion rights that have many concerned about the court's ruling. In a concurring opinion, conservative Justice Clarence Thomas wrote that he also desired to reexamine other "erroneous rulings."

In particular, he noted a desire to relitigate Griswold vs. Connecticut -- the 1965 ruling in which the Supreme Court said married couples have the right to obtain contraceptives.

“There are many instances where pregnancy is just simply unsafe for women and they have to rely on contraception," she said. "Does it become criminal? These women have other families you're going to put them in jail, are they going to? How are they going to provide for their families?”

But contraception wasn't the only case Thomas mentioned in his opinion.

He also took issue with cases that recognized the rights of the LGBTQ community -- 2003's Lawrence v. Texas, which established the right to engage in private sexual acts, and the 2015 ruling in Obergefell v. Hodges, which legalized same-sex marriage. 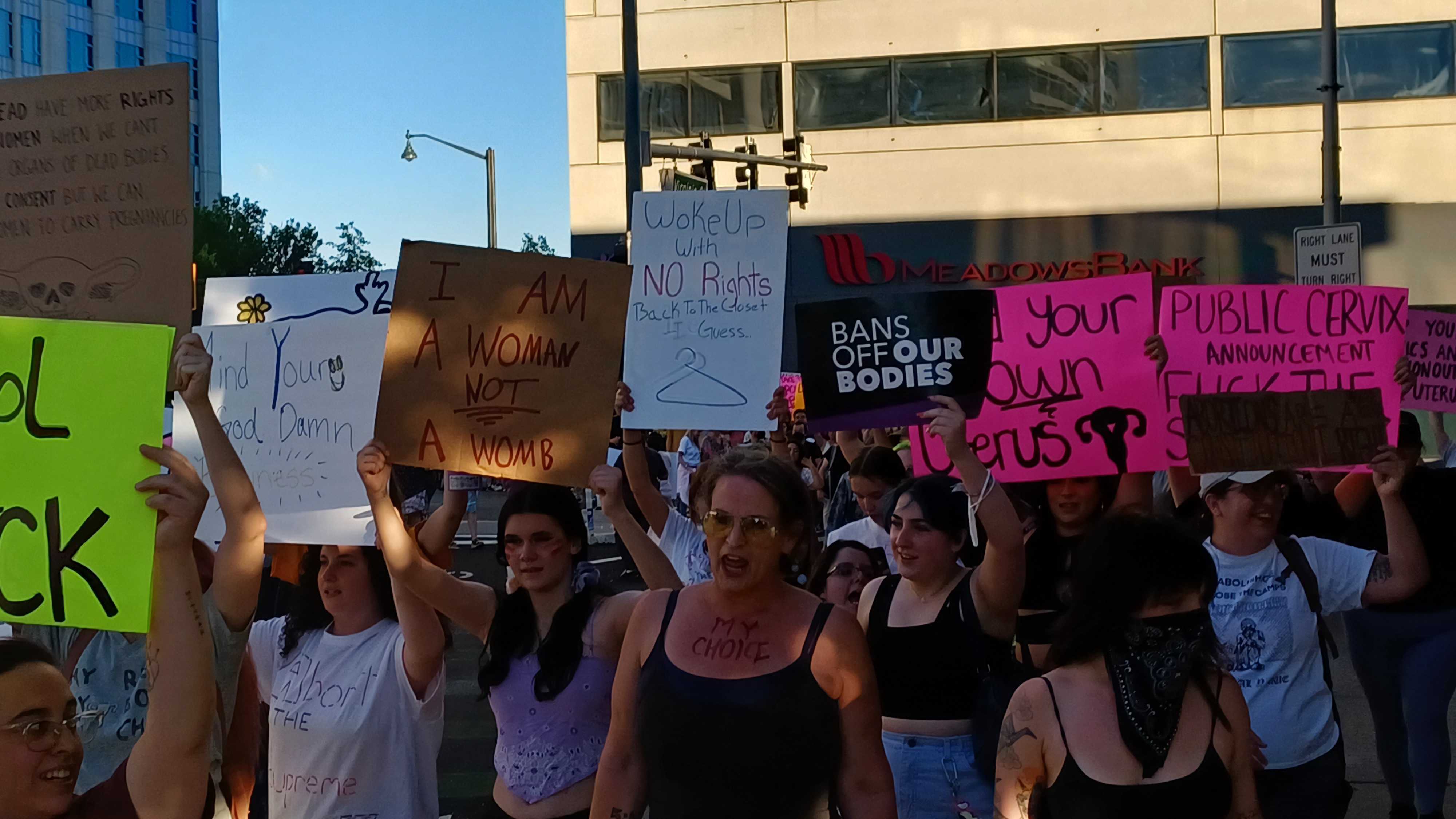 Laura Campbell with the Nevada chapter of the National Organization of Women said she hopes the reaction and energy is carried into voting booths in November. She said her group is working to register voters, noting it's easier in Nevada to register than most states.

"In my 32 years, I never thought this day would come," she said.

There are also concerns the decision leads to a further backlog of health care resources for women in Nevada.

"We have a chronic shortage in general, in terms of health care providers, nurses, doctors, physician's assistants, and this is certainly going to aggravate it," said David Orentlicher with UNLV. "So it will be very important for the community to step up to make sure we have the funds to to have adequate supply and make sure people can get access to services they need."

And while the other justices made assurances that their opinion in Dobbs only reflected the right to an abortion, elected officials wasted little time politicizing the opinion.

Speaking to reporters after a press conference Friday, U.S. Senator Jacky Rosen said it underlined why voters should head to the polls this fall.

“The Supreme Court made the decision they made and we are going to have to move forward from that. We're going to have to expand for me. I'm a Senator. We expand our majority our democratic pro choice majority in the United States Senate. We can codify Roe v. Wade," Rosen said.

And it's a point many at this weekend's protests took to heart.

Near the Reno courthouse, Ebony Stefanelli was sitting on the grass near some activists with clipboards.

She said the decision has underlined how fragile some of our rights are.

“Yeah, we're okay here in Nevada now, but things happen with the Senate and it might not always be that way. Inequality does light a fire and so it is a little anger driven, but it's because I think people should be treated equally," she said.

"It's concerning to see democracy at risk, it's concerning to see how the decisions of six individuals can change the lives and trajectory of millions of people in America," Wade said. "Regardless of this thing, and a reproductive rights issue, or how it might relate to LGBTQ rights, what we're witnessing is this time in our American history where our questions about who has rights and who has equal rights is called into question."

Of course, not everyone is upset with the Supreme Court's decision. Anti-abortion activists pushed for this ruling for decades, and some conservative candidates for political office see this as a chance to make gains in the Silver State.

But if they want to change Nevada's abortion laws, the earliest that could happen is 2024 and would require Nevadans to vote on the matter through a ballot initiative. The original vote in 1990 was affirmed by 63.5%.

'This will not stop here': Here's how Nevada's elected leaders are reacting to SCOTUS decision on Roe

As the Supreme Court weighs the future of 'Roe v. Wade', experts look beyond abortion