'This is who I am. This is what I do': LGBTQ cops in Southern Nevada share adversity of representing both

Police officers all wear the same uniform, so the public often paints them with the same brush.

But imagine what it’s like being gay, lesbian, trans—anything beyond straight—and being a cop. Because it’s not as though police, historically, have treated people in the LGBTQ community well.

Talk to people in Las Vegas who were part of the first Pride parade decades ago, and some will remember being harassed by the very police who were supposed to be there to protect them.

In fact, Pride month stems in large part from anger at police for their treatment of the LGBTQ community.

LGBTQ police in local departments in Southern Nevada will tell you they are, perhaps, more welcomed by their departments than they are by the LGBTQ community at large.

Las Vegas police have been at the forefront of that change. In 2012, the department its LGBTQ Recruitment Council. The council was designed to improve diversity and inclusion within the department.

Michelle Tavarez, a captain, and Mike Thiele, a traffic intervention officer with LVMPD, are both on the council.

"It hasn't always been rainbows and butterflies in our agency," said Tavarez, noting a big change happened after the Pulse nightclub shooting. 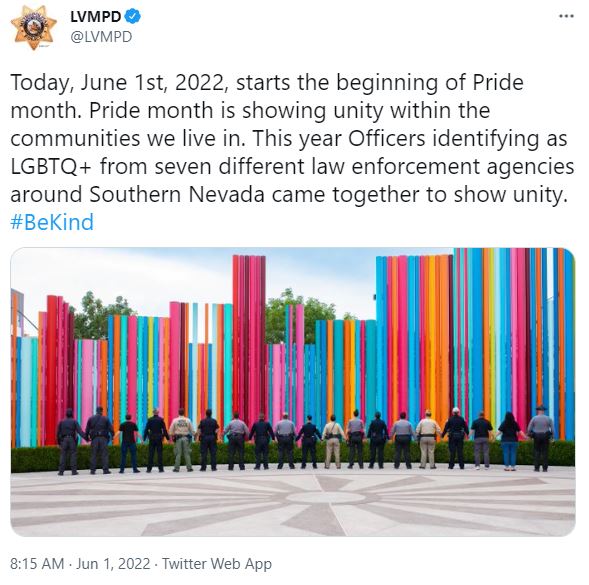 In recruitment events, she said they speak "open and honestly" about the department's past. But, "it doesn't happen like that anymore."

Thiele said knowing your own adversity, you're able to share that experience in policing and understand why someone would be hesitant or afraid of law enforcement.

"When I first started dating the first guy that I actually was out with, my squad knew, but I wasn't out to the squad, and the squad literally -- we were out on a call afterwards. They were like, 'Hey, Mike, it's okay. We know. And we love it. We want you to bring your boyfriend to our gatherings, don't hide who you are.' And I think if people understand that, if you give a little bit of trust, you're gonna get a lot of trust and a lot of open back, versus closing off," Thiele said.

Alex Cuevas, the spokesperson for the North Las Vegas Police Department, came out to fellow officers in 2016, while he was still in the police academy. He said the courage to do so came from how he was raised.

He said it's a fragile, delicate subject, but it was rare for officers make it known Cuevas' sexuality made them uncomfortable.

"I wish everyone the best and want everyone to grow together. But if one thing about my personality and my being a human being makes someone uncomfortable for something so minuscule, then that's on them," he said.

Several officers have told KNPR they're accepted as a member of the LGBTQ community in the department, but not always as an officer in the gay community.

"A lot of times, I get a lot of flack for saying I'm a police officer," he said.

What do they say?

"That they're either afraid of me, that they're thinking that I'm going to kill them, or that I hate them. It's very disheartening to hear that from someone that I just had a great conversation with and just be making friends," Cuevas said.

Interactions like that are based on historical interactions between the community and police. Cuevas said he wanted to be the change.

"There're so many people out there within the community that will not report certain crimes, will not talk to officers, will not say anything. I want to be the change, I want to make sure that there's dialogue between the communities," he said.

He credits his parents, both former law enforcement, for their support.

Metro Police Needs Minorities, But Will They Come?