Adult use of marijuana has been legal for five years now. The law is pretty strict. Use can be at home and nowhere else, but moves are underway to create marijuana lounges, or cannabis consumption lounges.

The state has been taking a couple years to draft lounge regulations, and earlier this week, the Clark County Commission held a special meeting to talk about it.

The state regulations were drafted by the Cannabis Compliance Board, which oversees the industry in Nevada.

Currently, NuWu Cannabis is the only legally operating consumption room in Southern Nevada. The 24-hour drive-thru is north of downtown Las Vegas on Paiute Tribe land.

A bill signed in June 2021 allowed the board to move forward with lounges. Tyler Klimas, the board’s executive director, said they’re taking a similar approach on those to how they regulate the industry currently.

“That was making sure that we have a strict regulatory regime, that we focus on public health and safety of the consumers. And that's both for the residents in Nevada, and obviously, those who come and visit our state,” he said. “Looking at these regulations through that lens, which is the same lens, we look at all of our regulations.”

He said they’ll need to give lounges flexibility to succeed.

Klimas chairs the advisory committee, as well, and that created three subcommittees: one on public safety, one on public health, and a third on social equity, inclusion and diversity. Those subcommittees had their respective granular conversations, then sent their recommendations back up the chain. 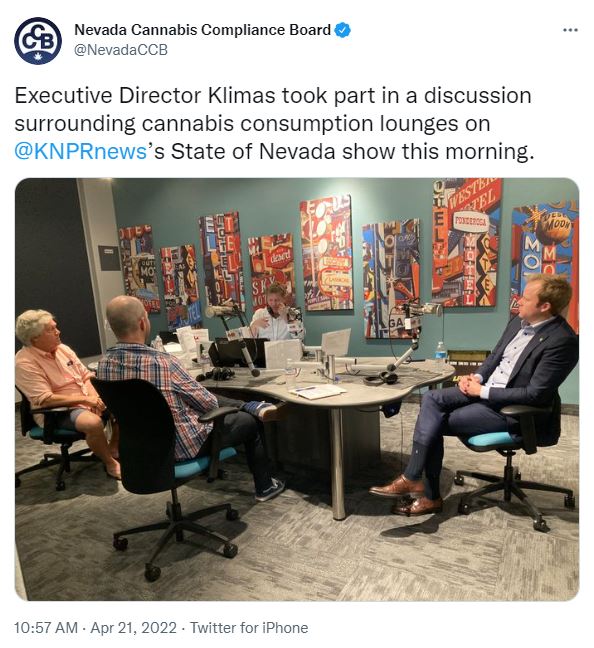 Currently, the Cannabis Compliance Board is working on the first draft of cannabis lounge rules and regulations. From there, local jurisdictions get to work.

Will there be pot lounges in casinos? Not now, Klimas said, unless there’s change at the federal level – a national decriminalization on marijuana. He said he’s hopefully it will happen eventually, and when it does, “we're going to see robust participation between both of those industries, especially here in the state of Nevada.”

Social equity was part of the provisions of the bill in the Nevada Legislature. Ten of the first 20 licensees are set aside for social equity applications. The board’s job is to define those parameters.

“Really trying to capture those individuals that were impacted by drug policy in the war on drugs over the past couple of decades, and trying to make sure that they have an opportunity to get into this industry and reap some of those economic benefits for them and for the communities that they remain in today,” Klimas said.

These developments are cause for celebration for Clark County Commissioner Tick Segerblom. He’s known in many circles as the “godfather” of legalized marijuana in Nevada.

Next year? He said he’ll be celebrating 4-20 at a consumption lounge.

“I have a spot on the Strip picked out already.” 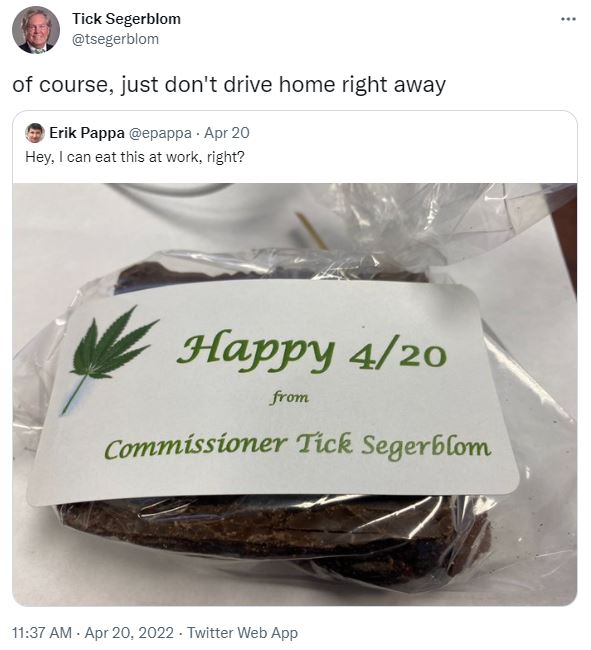 The commission held a special meeting on Tuesday on this topic. Segerblom said they don’t want to be the ones “holding it up,” to open lounges around Las Vegas.

“What happens is the state issues the license, but then the county has to confirm that license,” he said. “And we don't want to have months or years between those two, which happened, frankly, back in 2013.”

Segerblom said he wants to handle this in a way that doesn’t surprise the community. Meaning neighborhood meetings would be held for each new location. And while fellow Commissioner Marilyn Kirkpatrick has been reluctant to the issue of lounges, logistically, Segerblom disagrees.

“We are so in need of this,” he said. “People come from out of town, we advertise around the world come to Las Vegas and buy pot, but they walk out the door, they literally cannot use it anywhere legally. So what's up with that?”

YOU WANT TO KNOW: WHERE DOES THE MONEY GO?

Segerblom said they have a 3% override on sales in Clark County in the unincorporated area. That’s generated $16 million, “or maybe a little more than that,” he said.

The first $12 million of that has been assigned to homeless programs.

“They'll come to us and say we want to rent this building, or we want to support this program, and we approve it,” he said.

The remaining $4 million has been approved to be used for marijuana-related offenses. That can support programs to remove a marijuana conviction or give $500,000 to the legal immigration clinic.

“Anyone who wants to take advantage of that money can apply to either the commissioners or to the county,” he said. “It's very exciting to actually try to use the money from marijuana to rectify the harms that have been caused over the years.”

NOT JUST A ROOM TO SMOKE IN

The flexibility in defining lounges means there’s room to be what they want to be, said Brandon Wiegand with the Nevada Cannabis Association.

“It could be fine dining, could be tasting rooms for operators to be able to allow individuals to sample product before they purchase, to get into the education behind the product,” or a comedy show, or even those wine and paint events – but with pot.

“Puff and paint sounds like a wonderful opportunity,” he said.

In the meantime, it might not be the pot product you imagine.

She said all dispensaries have been looking for beverage partners, so the idea has been popular.

“They're looking for a safe way to enter into cannabis,” Kubik said. “I think it's going to be a game changer for both new consumers, current consumers, for the lounges for the dispensaries.”

A history of cannabis in Nevada

How Do You Buy Your Marijuana?

The Tricky Path To Legalizing Cannabis Lounges In Las Vegas