Legendary radio and TV host Wink Martindale was friends with Elvis Presley for a long time, and he’s going to be telling the musician’s story in full this weekend.

Martindale, 88, was in the room back in July 1954 when “That’s All Right, Mama” first debuted on the radio. The switchboard “lit up, we definitely had something big time,” he told KNPR on Friday. Martindale called his parents in East Memphis, who told him Presley was so nervous about it playing, he went to see a double feature.

Their friendship remained until Presley’s death. 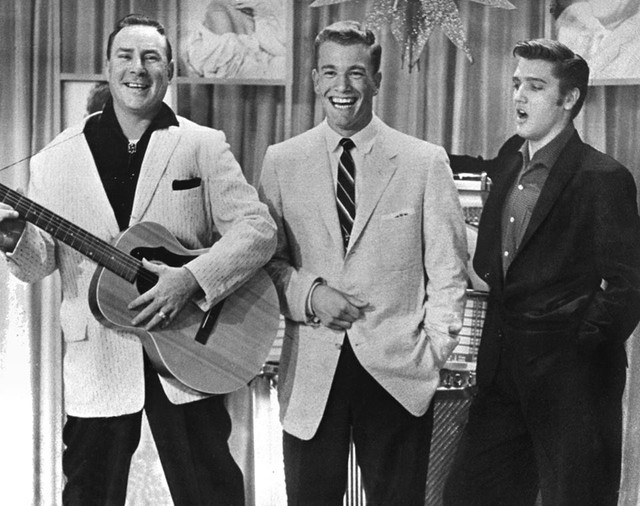 The two crossed paths several times throughout their careers. In 1976, on Martindale’s birthday, he and his wife went backstage with Presley.

“He said to me, ‘Gee, look how well you've done with your career.’ And I remember thinking after leaving the dressing room, how strange and odd that Elvis Presley was looking at me telling me how well I've done. When he was the man, the magic and the music.“

Many years earlier, Elvis played at a club owned by Sandy Ferra’s father. The two dated for six years when she was a teen and remained friends afterward. She later appeared in “Viva Las Vegas” and danced in several other of his films.

“It was a wonderful time in my life,” she said. “But marrying Wink is the most perfect thing on earth, because we've been married for 47 years. …  I mean, God knew I couldn't have Elvis. Because when I was young, I prayed for somebody I could grow old with. And he knew Elvis was going to leave the planet. So I guess he gave me Wink, and we got together.”

The 14-hour radio program will feature rare interviews with Presley and others in his close circle. Martindale called the show the most comprehensive story on Presley yet. It will include interviews taken on-location in Las Vegas, Memphis, London, Tupelo and covers “just about everything,” he said.

“He, I think, changed the face of Las Vegas,” Martindale said. When Elvis returned to live performances, he returned to the International Hotel in Las Vegas, where he played to sold out crowds each night. He said because of Las Vegas and the success of “Suspicious Minds,” Presley was “back on top, spotlighting the best of the best.”

The program starts with Presley’s early years in Memphis, then the Sun Records chapter, followed by Elvis mania, the first RCA recording session and when Presley went to war. “The King of the Strip” will be told in the 11th hour.

The show, which took months to complete, will be available after air at ivoxplus.com.

Reconsidering The King: Elvis In America