The first time she traded sex for food to feed her family, J was 14 years old. Her father died when she was an infant, leaving her single mother to care for her and her six siblings in her native village in eastern Uganda.

She soon gave birth to a baby girl, and her family continued to struggle to eat. So at 16, lured by a relative and the prospect of earning money as a maid, J left her baby behind and traveled 101 miles to the capital to find work so she could send money back home.

"We [had] nothing to eat, nothing to drink, nothing to feed the baby, to dress the baby — nothing," she told NPR. "I thought when I was in the village that things are easy here in Kampala, that I will find peace, I will work."

Then, famine struck her village and her daughter became ill.

"The pressure was too high for me," she said. "At that time, in my mind, I could not resist anything. ... I needed money to take care of my mama and the baby," she said.

J turned to sex work to make money. J's clients were willing to pay more for sex without a condom, which let her send more money back home. But it also put her at greater risk for contracting HIV.

At age 22, J tested positive. (She asked NPR to refer to her by her first initial because of the stigma surrounding HIV and sex work.)

Many women and girls living with food insecurity in sub-Saharan Africa face this dilemma. A study published in July by ICAP at Columbia University found that severe food insecurity approximately doubles the risk of contracting HIV among women in six countries in the region, because it often leads them to engage in transactional sex.

The economic shocks of the COVID-19 pandemic and the war in Ukraine have already intensified food shortages in sub-Saharan Africa, the ICAP study pointed out. And without efforts to mitigate climate change, the researchers warned that predicted increases in extreme weather events, from droughts and high temperatures to flooding and cyclones, will likely make food insecurity worse in a region where nearly one in five people are already undernourished.

In Uganda, where three-fourths of the population lives in rural areas, about 28% of households experience some type of food insecurity, the ICAP study found. Worsening drought, flooding and heat waves have contributed to land degradation, crop failures and the loss of livestock, among other consequences.

"Women, particularly those heading their own households, need to be specifically targeted with food assistance," they concluded.

Now 32 and the mother of four children, J wants to tell her story to raise awareness about the risks that food shortages pose to vulnerable women and girls in her country.

With 38.4 million people currently living with HIV in the world — and 1.5 million new infections per year — the study's findings offer new insights into how combating food insecurity can help control the virus.

Women and girls experiencing food insecurity were 28% more likely to engage in transactional sex, defined as sex in exchange for material goods, including food. They are also more likely to engage in high-risk or unprotected sex, sex before the age of 15, forced sex, or sex with a man who is 10 or more years older, the study found. This increases their risk of contracting HIV.

Women-headed households, particularly those with many children and other dependents, were at higher odds of experiencing food shortages. Migration, being widowed or divorced and having little or no education were also associated with severe food insecurity.

And being HIV-positive was also linked to severe food shortages, as infection can lead to job loss, poverty and hunger, which puts people at risk of experiencing disruptions to their HIV care, potentially leading to higher rates of transmission to others.

'We didn't know much about it'

It was food insecurity that eventually drove J to Kampala, and from there, into sex work.

After settling in a slum and working for 18 months, she hadn't been paid nearly what she'd been promised.

Eventually, she was approached by female sex workers living in her neighborhood, who told her that she could earn much more money through sex work.

"They told me that 'You are such a beautiful girl, you can get money using your body.' That's how they presented the thing to me. You can sell your body and you get money to help your baby and your mother," J said.

Describing the difficulties of engaging in sex work, from being pressured to use drugs to risking her health and safety, J said, "It was not easy."

After mobile community health workers approached J in her neighborhood about the risks of HIV and tested her, she found out she was HIV-positive. "We didn't know much about it," she said, referring to the lack of awareness around HIV risk in her community.

J eventually entered into a long-term relationship with a former client, who helped to support her financially and with whom she mothered three more children.

None of her children are HIV-positive, J said, but right after her partner passed away from AIDS-related complications in 2018, J was forced to engage in survival sex work again to feed her children and keep them in school.

The ICAP study highlights an important solution to the predicament facing J and so many women in sub-Saharan Africa. The researchers found that providing direct food support to women significantly lowered the risk of contracting HIV.

"This is such really strong evidence ... because so many studies and so many people are included, hopefully we'll start to see food insecurity as part of HIV prevention care," said Carmen Logie, a University of Toronto professor whose research focuses on HIV stigma and marginalized populations.

"How can we think about sustainable solutions? And I think that's where we need a really multidisciplinary approach," said Logie. "Let's work with food and climate experts, you know, local folks who know the soil, who know what can grow. How can we really do with a climate-resilient approach to addressing food security in a sustainable way? Because the fact is, we don't have enough donations of food to the World Food Program."

Dr. Sheri Weiser, co-founding director of the University of California Center for Climate, Health and Equity, has been involved in several food intervention initiatives that she said echo the ICAP team's findings.

"We know that food insecurity is a key driver of HIV acquisition risk and worse HIV health outcomes, and as a result, many medical organizations now view alleviation of food insecurity as part of core medical care for people living with HIV/AIDS," Weiser said.

One initiative Weiser is involved in, Shamba Maisha, is an ongoing agricultural livelihood intervention, where HIV-positive residents in rural Kenya are given tools and training in sustainable farming practices and financial management. Weiser said her team observed "dramatic improvements in the proportion of the virally suppressed."

Weiser also pointed out that her team recognized the importance of adapting their food interventions to changing climate conditions. "Climate change negatively impacts all dimensions of food insecurity. For example, drought, high temperatures and heavy rains contribute to crop loss, livestock death and migration of fish," she said. "Food safety can also be compromised by contaminated food and water supplies."

J said that in her Ugandan village, people often don't have enough seedlings to plant for the next season.

The mother of four also called on the Ugandan government and NGOs to ramp up campaigns to educate people about food insecurity and HIV risk and transmission, especially those who are most vulnerable.

Though she is receiving HIV care, J still occasionally engages in sex work to make ends meet. She said she often encounters little girls who are at high risk, just as she was when she was a teenager.

"The young girls are still coming. ... I don't want them to end up where I ended up," she said. 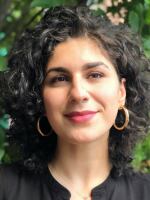