Feds Rounding Up Thousands of Wild Horses Threatened By Drought

A helicopter rounds up a group of wild horses living near the Utah-Nevada border in August. The animals will be placed into an adoption program with the goal of getting them into private stables, pastures and ranches across the country.

Lisa Reid, a public affairs specialist for the Bureau of Land Management, is watching the action while sitting on a blanket under an umbrella. The chopper swoops past the herd again, trying to move them towards a corral.

“The helicopter works like a sheepdog,” she says. “It works the horses from side to side, guiding them in the direction it wants them to go.”

Reid’s agency is in the middle of a massive emergency campaign to get more than 6,000 wild horses like these off of public lands and into an adoption program. It argues that the animals are suffering – and even dying – due to the region’s severe drought. Dependable water sources are drying up and forage is dying.

“People want to say, ‘Let Mother Nature take its course,’ but, boy, that’s the stuff nightmares are made of,” Reid says.

She remembers reading reports about a small group of wild horses that died from dehydration during severe drought two decades ago.

“There was one foal that was still alive and it was nursing off of a dead mom,” she says. “That’s heartbreaking.”

The wild horses rounded up today are faring better than that – but not by much. At a nearby corral some of the mares look gaunt.

“You can see their ribs and their hip bones,” Reid says. “That is definitely a direct impact from the drought.” 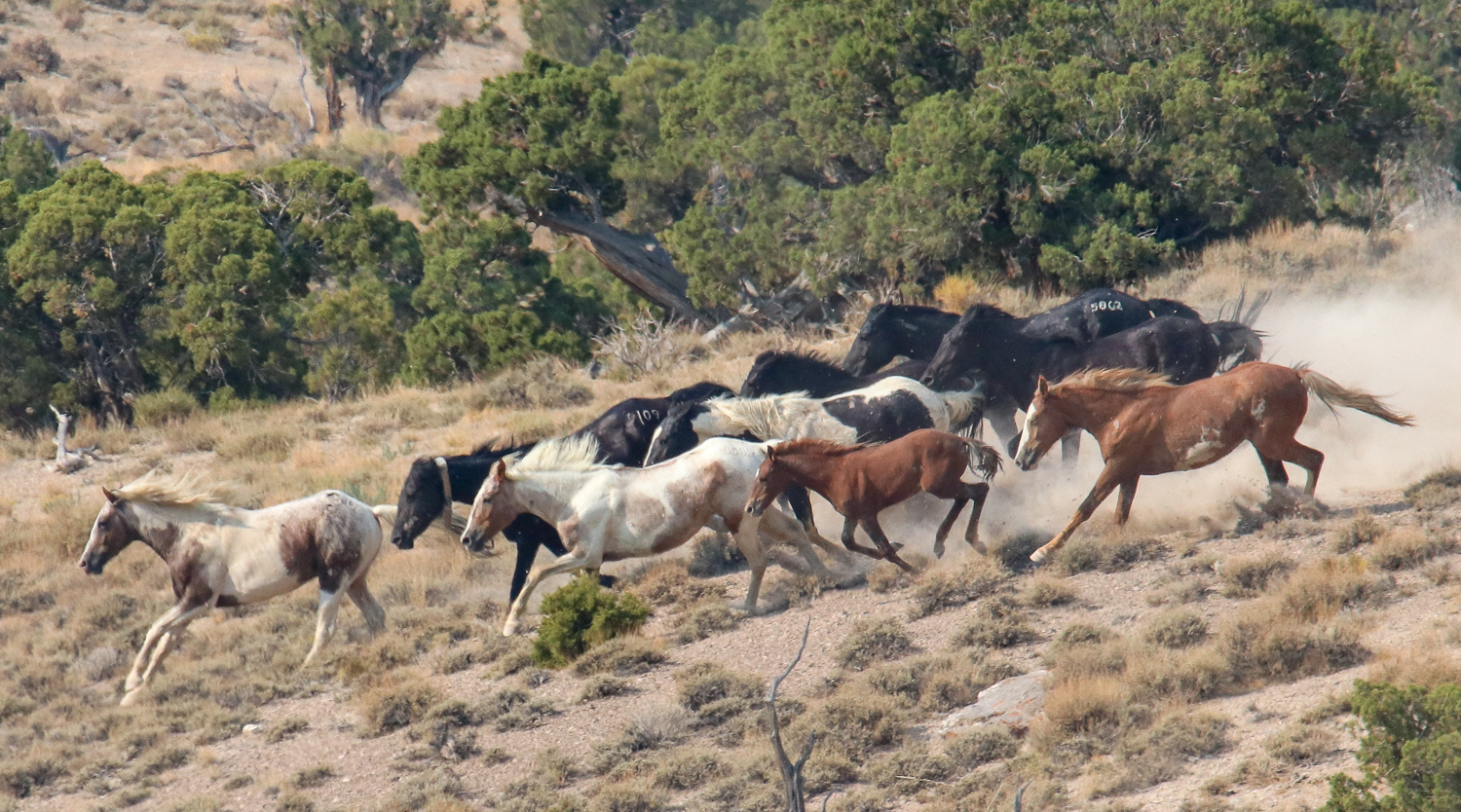 Unlike other desert creatures such as bighorn sheep or mule deer, the U.S. government can’t allow these horses – or their cousins, wild burros – to die en masse from the drought. A 50-year-old federal law ensures they are protected and mandates a set number of healthy horses and burros living on healthy rangelands.

But over the past few decades, the BLM has struggled to keep populations in check. With few natural predators, herds can grow by up to 25% each year. Currently there are nearly 90,000 wild horses and burros living across the West – roughly three times more than are allowed under agency guidelines. It argues that this is creating unhealthy conditions and the drought is making things worse.

So the agency is rounding up these horses and putting them into an adoption program.

“It’s different than picking up a puppy at the pound,” says Dwayne Oldham, owner of a public, off-range wild horse pasture on the Wind River Indian Reservation in Wyoming. “You’ve got to spend a lot of time with them.”

Breaking a wild mustang takes commitment, according to Oldham, who helps the agency adopt out wild horses captured during these roundups.

“I don’t recommend that you watch one YouTube video and go try to do it,” he says.

He says the horses are often adopted by experienced handlers such as ranchers, hunting outfitters or sheepherders. They also sometimes go to small stables in places as varied as Houston or West Virginia. But the adoption program and the roundups themselves are also controversial.

“The roundups lead to slaughter,” says Suzanne Roy, executive director of the nonprofit American Wild Horse Campaign. “There’s just no way of getting around it.”

She says the problem stems from BLM incentives. A year after adopting a horse, owners get a thousand dollars from the government.

“They’re collecting the cash incentive and as soon as the money clears their banks they’re sending the horse to the slaughter auction,” she says.

Slaughtering horses is banned in the United States. But some of these animals are bought at auctions – also known as sell barns – and then sent to Canada or Mexico where slaughter is legal.

Roy’s organization has identified nearly a hundred wild horses and burros at sell barns over the past few months.

“Hauling water is like a bandaid,” says Gus Warr, who leads the BLM’s wild horse and burro program in Utah.

The bottom line, he says, is that roundups are the best way to quickly get horses off of drought-stricken public rangelands. As for slaughterhouses, in July, the BLM implemented tougher screening measures to help weed out bad adopters. But Warr acknowledges the new protections can only go so far because, after a year, an adopted wild horse becomes private property.

“Once it’s private property, if someone wants to sell it to a friend or a neighbor and it might end up at a sell barn, then those individuals have that legal right,” he says.

The BLM stresses that a majority of adopted wild horses don’t end up at these sell barns – they go to good homes.