Weddings Surge In Las Vegas As Pandemic Eases Across Nation

Shannon Santos and Greg Daly prepare for themed wedding photos at a chapel in Las Vegas on July 21, 2021.

Branden Paul has got the look. The dyed black pompadour. The bedazzled suit. The sunglasses. He’s an Elvis impersonator and, on a recent Wednesday, he guided two young women – Jess Sandoval and Alana Stroebel – through some special vows at the Graceland wedding chapel in downtown Las Vegas.

“Jess, I want you to look Alana in the eyes and say, ‘I promise to always love you tender and never leave you at the Heartbreak Hotel,” Paul said to laughter.

This is the eighth wedding he performed that day. Las Vegas is in the midst of a wedding boom as the nation’s vaccination rates rise and the United States begins to recover from a grueling pandemic. The surge is bittersweet for Paul. He has a tough time singing these days. He contracted COVID-19 last October and has some lingering symptoms. 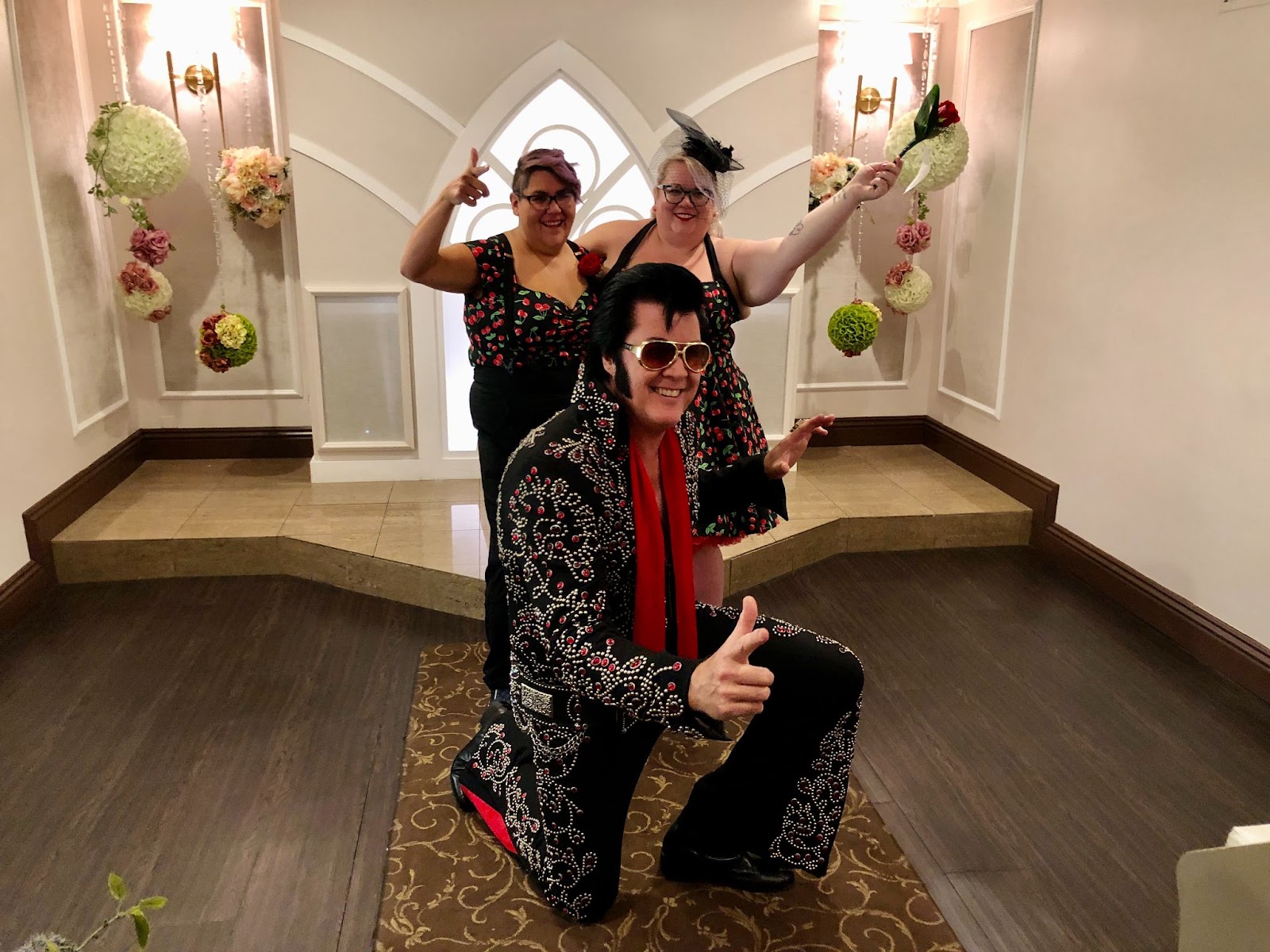 This summer he’s being forced to deal with it. After having to lay off employees last year due to the pandemic, he’s now performing dozens of ceremonies on weekends.

In fact, the entire $2 billion wedding industry in Las Vegas has rebounded in a big way since March, when vaccines became widely available and casinos began increasing capacity. By June, about 340 couples were getting married every single day here, according to the latest available data from the Clark County clerk’s office. That’s more than double compared to last year and is even higher than pre-pandemic levels.

She says roughly 18,000 people are employed by the industry in southern Nevada. It’s a bedrock part of the region’s economy, along with tourism and gambling.

“We have so many different options on how to get married that it just permeates throughout the local economy,” she says.

That economy took a big hit during the early days of the pandemic. Casinos and businesses were shut down, and weddings plummeted too. In April of last year, they were down by 96%. But now business is booming. It should also be noted that COVID-19 has boomed in recent weeks, as well. The number of hospitalizations doubled, according to state data, but it now appears to be tapering off. Clark County just brought back a mask mandate for employees working in crowded indoor spaces.

But the uptick in new cases didn’t dissuade couples such as Randy Rathbun and Sophia Heid from coming here to get hitched. They’re doing it in a helicopter flying over the city. They met a couple of years ago on a dating app. 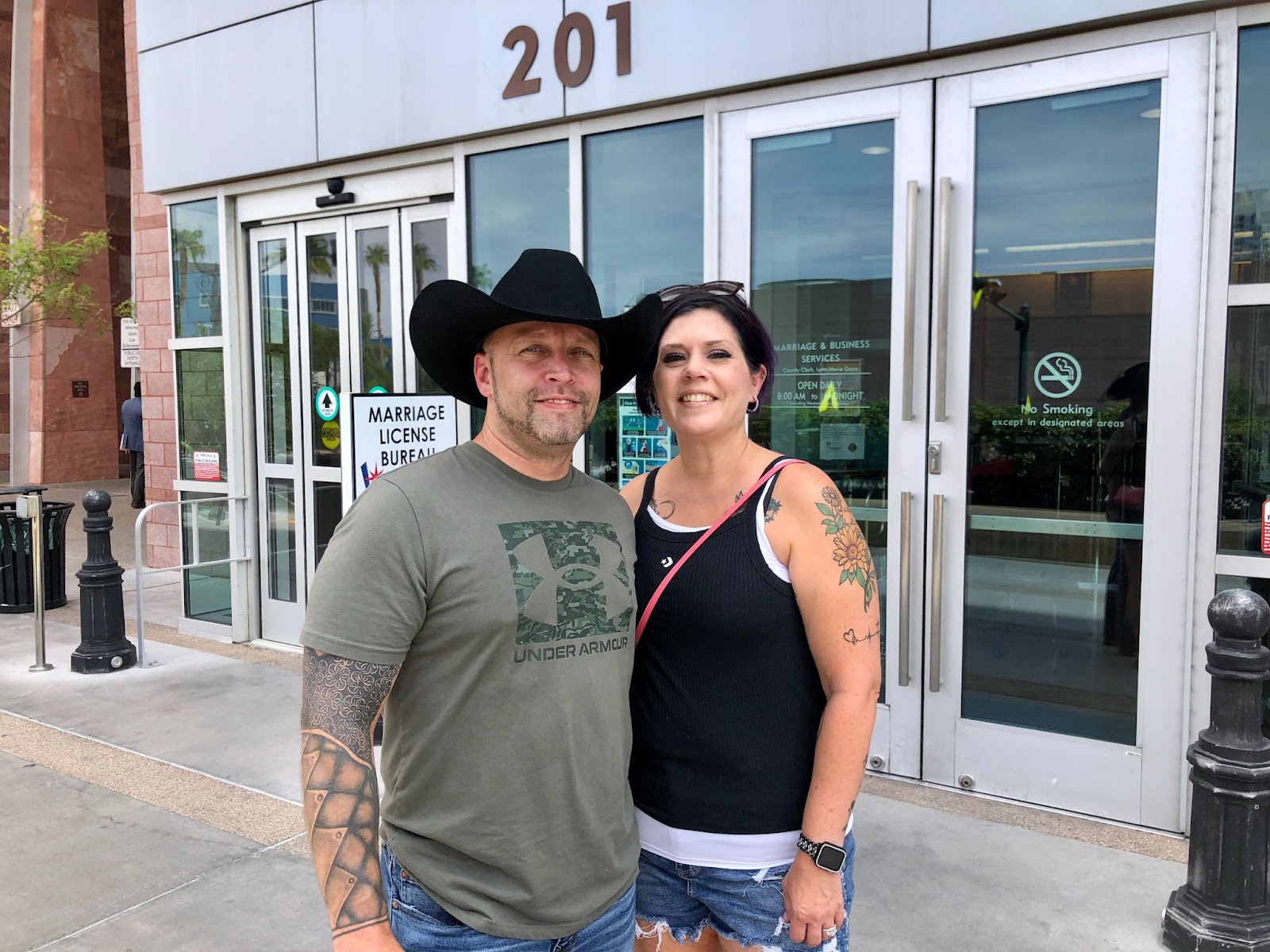 “I know friends who have been married from dating websites so I thought I’d give it a try,” says Heid. “Obviously he gave it a try, too. And voila. We’re in a helicopter.”

She says the pandemic brought them closer together. There was no proposal. They were walking around a mall last August and just decided together to tie the knot. Heid loves how caring her soon-to-be husband is. He’s got a big heart, he’s kind, and:

“He has a really nice butt,” she says laughing. “I really like that part too.”

Heid and Rathbun will soon join the more than 37,000 couples who have gotten married in Sin City this year.

Viva Las Vegas! The City's $2 Billion Wedding Industry Is Back