'Pine' dining pops up on Mt. Charleston as anticipation builds for Lodge's return

Dining in the woods can be fun, but what if you could enjoy elevated food at a serious elevation?

The owners of Mt. Charleston Lodge call it Pine Dining.

It’s a prelude to the reopening of the iconic landmark that suffered irreparable damage after a fire last September.

The Lodge was first built in 1915 by E.W. Griffith, the first public commercial facility on the mountain. Christina Ellis is the general manager of Ellis Island.

Her family owns the historic Lodge and plans to start the rebuild soon.

A handful of local chefs will pop up on the mountain for a “Summer Chef Cookout Series.”

"The opportunity to rebuild such a historic landmark history aside, just the memories everybody holds to it, it's such an exciting, almost daunting task to build a new structure that's going to be there for the next generations of Las Vegas and Mount Charleston residents," Ellis said.

There's no public timeline on the project yet, but Ellis said it'll be a blend of new and old.

We're working really hard to make it a space that pays tribute to the old space while welcoming a new time for the Lodge, as well.

In the meantime, they're hosting Pine Dining.

The Saturday events are more of a cookout with food, drinks and entertainment. The Sunday events are a chef's table meal with more family-style seating.

Proceeds from the event will go to local nonprofits. 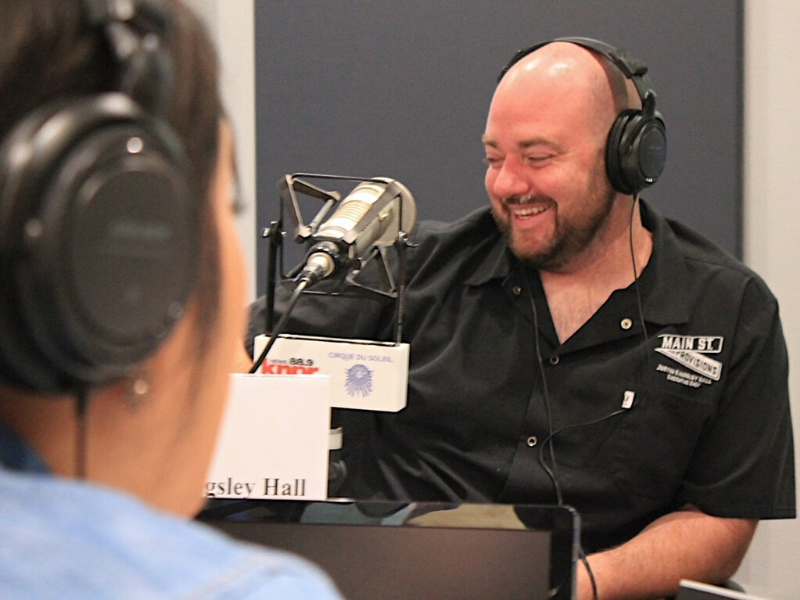 I think anytime there's some kind of outdoor cooking, you know, invites tend to come along to me. It's kind of what I love to do.

Chef Hall is known for meats. At his restaurant, you can find venison, rabbit sausage, smoked duck breast. But he said his Pine Dining weekend will be a little more accessible.

"It's kind of paying homage to my heritage. I'm calling it August and Marcel, which is my great aunt and uncle who emigrated from France. And that dinner is very French countryside," he said.

His family, like many in Southern Nevada, have made memories on the mountain:

We went up hiking, we went to the Lodge. And over the years, that became a thing, especially in the summer, to go hiking once a week, to disappear from the heat, to be up in the trees. Take our dog up and sit on the patio at the Lodge, or many times, we just randomly would drive up to the Lodge for hot chocolate with whiskey in it.

It's near and dear to Ellis' heart as well:

I was probably like, 3 years old, my entire family, cousins, aunts, uncles, grandparents, went up to the Lodge for Christmas Eve and I have all these wonderful photos of me dressed like the little kid from 'A Christmas Story,' just absolutely bundled in scarves and jackets and throwing snowballs at my grandpa. And that was something that over the years, we would always, always talk about.

Pine Dining begins Saturday, July 23, with the final dinner on August 14, but more are in the works for future dates.