'This will not stop here': Here's how Nevada's elected leaders are reacting to SCOTUS decision on Roe

The U.S. Supreme Court has overturned the constitutional right to an abortion, reversing Roe v. Wade, the court's five-decade-old decision that guaranteed a woman's right to obtain an abortion.

I’m disappointed to see this decision from the Supreme Court — it will rip away critical healthcare and the right to choose for millions & undoubtedly cause harm. As long as I’m Governor, Nevada will continue to fight for reproductive rights & expand access to healthcare.

Today, a majority of justices on Supreme Court voted to overrule Roe v. Wade, rolling back the clock on reproductive care and depriving Americans of a long-established right. This is a devastating day for women in America. People in dozens of states across the country will live under extreme abortion bans, and access to critical care will be threatened all across the U.S. This is absolutely unacceptable. Women need the full range of reproductive health services to make important decisions about their physical and mental health, their bodies, their economic future, and their families’ well-being. The majority of Nevadans agree, and I will continue to fight for reproductive rights and push back on extremist laws that deprive people of essential health care.

This is a dark day in our nation's history and a devastating attack on women’s fundamental rights. The Supreme Court’s decision will have dire consequences for women’s health.

We can't give up. I'll keep fighting in every way I can to restore and protect reproductive freedom.

Today is a heartbreaking day in America. Government has no place to decide what a woman does with her own body.

The right to an abortion remains protected in Nevada, and Gov. Sisolak and I will always fight for a woman’s right to choose. 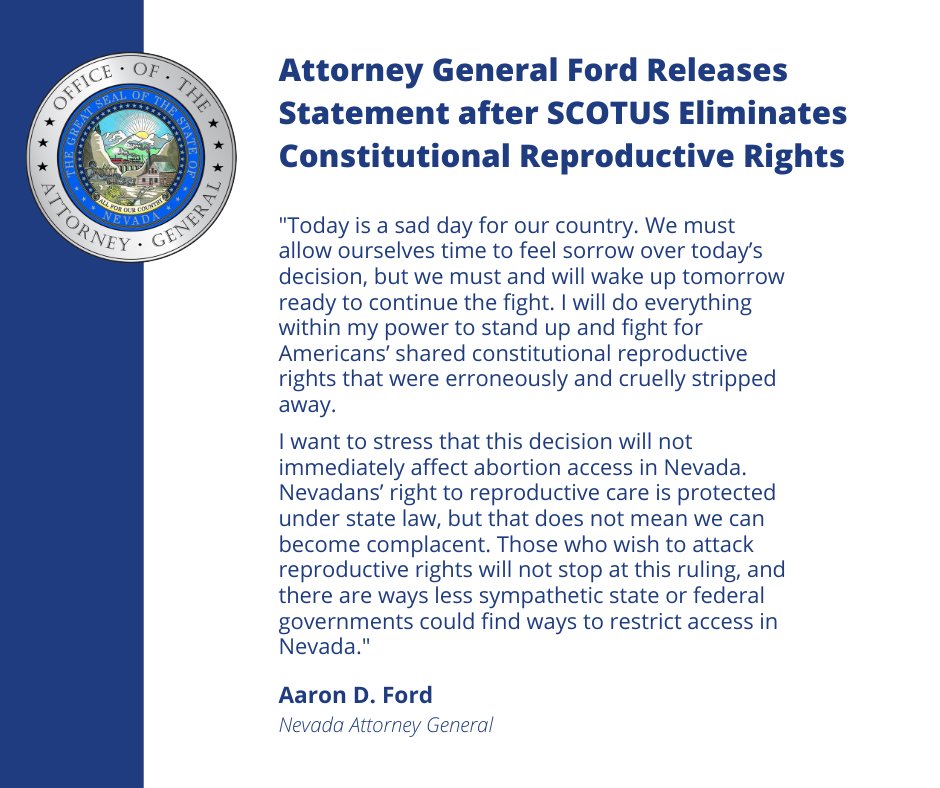 Today’s decision is an attack on the right to control our bodies, health, and futures. Despite pledging to respect precedent, conservative justices have effectively struck down the legal right to abortion enshrined by Roe v. Wade and Planned Parenthood v. Casey. Abortion rights are human rights and should not be subject to the political whims of the few.

In a country with high maternal mortality rates and limited access to paid family medical leave, reproductive rights are imperative for women to make individual choices about what is best for them and their families. Today’s decision is an assault on all women but particularly those living in minority, underserved, and impoverished communities. They will be forced to take drastic and unsafe measures to self-manage abortions or carry unwanted pregnancies to term.

Our history is brimful of brave women fighting injustice in the face of adversity. This battle will be no different and it is not over yet. I cosponsored and voted to pass the Women’s Health Protection Act to codify abortion rights nationwide. The Supreme Court has refused to protect our fundamental right to body autonomy, so the Senate must act now to end the filibuster and send this critical legislation to the President’s desk.

This will not stop here. Conservative judges have already stated an intention to revisit other constitutional rights like contraception and same-sex marriage. Thus begins the outrageous, but not surprising, erosion of long-standing human rights in this country.

The decision to end the protections of Roe v. Wade by the Supreme Court is unprecedented. For the first time in history, the highest court in the land has rolled back a right it had previously guaranteed.

The institution is supposed to be one that expands and guarantees the rights of Americans in the face of political turmoil. Instead, it has become an arm of politicians and ideologues. That turn is even more clear in Justice Clarence Thomas’ opinion in this decision, where he suggests the court should reconsider other opinions that have protected access to contraception and the rights of LGBTQ+ people to marriage and privacy.

Women’s choices about their health and family planning should be theirs to make. Abortion will remain legal in Nevada thanks to the protections voters enshrined in 1990 with overwhelming margins. But because other states are revoking the right to choose, we may see our health system strained as women travel to Nevada for safe treatment.

I have fought for and voted for a woman's right to choose in Congress. The Senate can immediately fix this. They can pass the Women’s Health Protection Act the House has already passed. It’s time to pass the bill and get it to the President for his signature.

The Supreme Court’s decision to strike down Roe v. Wade is an assault on our rights.

But I’ll keep fighting. I’m going to do everything I can to protect access to reproductive care.

In the long-awaited Dobbs v. Jackson Women’s Health Organization case, the U.S. Supreme Court ruled that abortion is not a constitutional right, thus allowing each state to regulate it as they see fit. While I am personally pro-life and have a strong pro-life voting record in Congress, Nevadans voted by referendum in 1990 to legalize abortions beyond the minimum criteria of Roe v. Wade. If Nevadans wish to change those abortion laws to reflect the Dobbs v. Jackson ruling, this must be done through a proposed ballot initiative. Just as the U.S. Supreme Court had a process to follow in terms hearing and reaching a decision on this case, the State of Nevada also has a process to follow in order to change our state’s existing abortion laws. In Congress, my voting record and legislative actions will continue reflect my commitment to protecting life. This includes preserving the Hyde Amendment and preventing the taxpayer funding of abortions and opposing the majority party’s abortion-on-demand agenda.

This is a historic victory for the sanctity of life and the principles of democratic self-determination. The Supreme Court has never had the expertise nor the authority to unilaterally legislate on abortion. After more than 50 years, that responsibility is poised to finally return to its rightful owners: the American people and their elected representatives. The people of Nevada have already voted to make abortion rights legal in our state and the Court’s decision on Roe doesn’t change settled law and it won’t distract voters from unaffordable prices, rising crime or the border crisis. 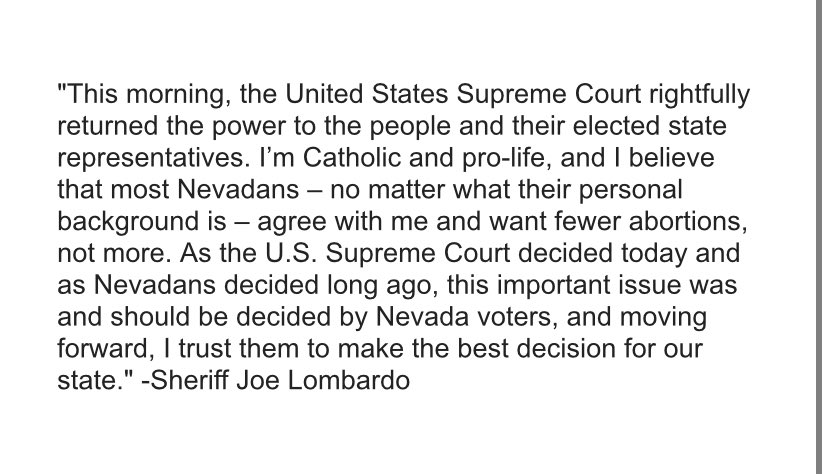 One woman's abortion story — before and after Roe v. Wade