'Not a cookie-cutter event': NFL Draft goes all in on Las Vegas

A worker swims in the fountain of the Bellagio hotel-casino during setup for the NFL football draft Tuesday, April 26, 2022, in Las Vegas.

Draft night on Thursday will include prospects walking a red carpet above the Bellagio fountains, a theater built specifically for the proceedings where they hope to hear their names called early, and the aura of gambling everywhere.

How about that for something different for the NFL?

There’s no question the flavor of Las Vegas — from the attractions to the casinos to themed hotels to showgirls lining the players’ walkway to the mountains nearby — infiltrates this draft. The league seems very pleased with that symbiosis.

“The key thing for the draft is to take on the character of where we are,” said Eric Finkelstein, NFL senior director of event operations. “This is not a cookie-cutter event. We try to embody and highlight where we are.”

He then noted the High Roller Ferris wheel directly in front of him and perhaps three football fields away from the theater stage where Commissioner Roger Goodell will announce the 32 picks on opening night. Finkelstein also mentioned circles on the stage emulating the famed “Welcome to Las Vegas” sign. Construction began on April 1. 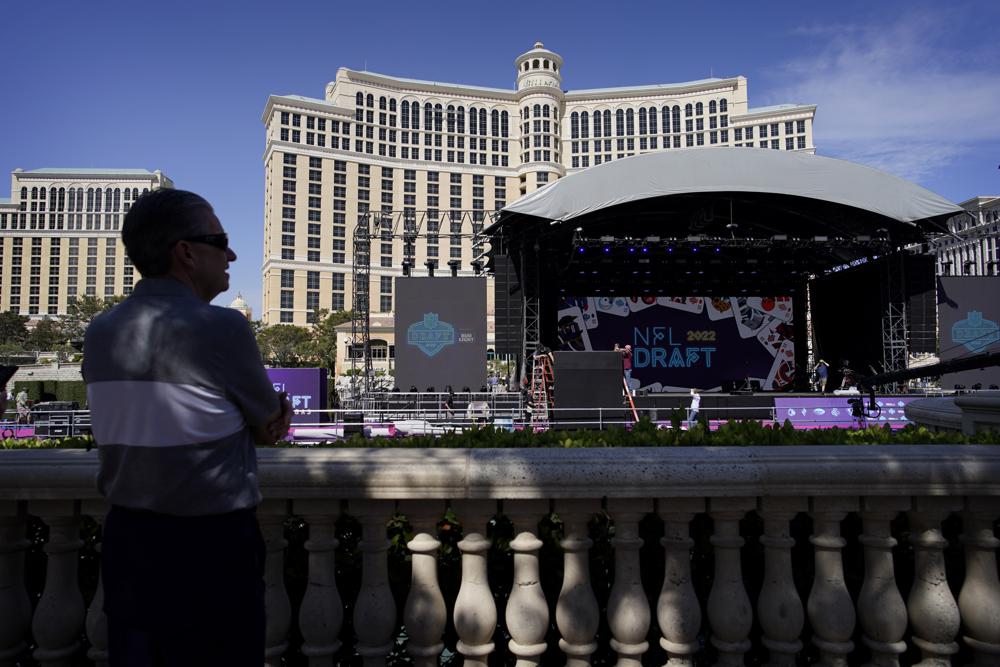 People look on as workers erect a stage during setup for the NFL draft Tuesday, April 26, 2022, in Las Vegas. (AP Photo/John Locher)

Above the stage flashed digital playing cards, each one designed for a specific NFL team. Adjacent to the theater, which will seat about 1,500 and has a footprint of about 1 million square feet, is Caesars Forum. That convention center even has an “NFL Draft Door,” which the league requested during construction.

“We worked with Caesars to add a door to allow us to get the prospects out of the building with a direct connection to our theater build,” said Heather Nanberg, the league’s director of events.

The 2020 draft originally was scheduled for Las Vegas, but became a virtual exercise because of the COVID-19 pandemic. So 2022 was substituted, and some plans changed.

At the Bellagio, for example, there was thought of placing the prospects on boats in the fountains to get them to the red carpet. Time constraints and weather concerns — Thursday night’s forecast calls for strong wind, unusual in Vegas this time of year — canned that idea.

Should the players need to escape the heat before or after walking the carpet, though, Kelsey Pietrangelo, the NFL’s manager of live event operations, joked that “we will have scuba suits if they’d like to jump in.”

Indeed, there were workers in scuba gear on Tuesday making late adjustments to the stage and walkway.

“Using six divers is a first for us,” she added. 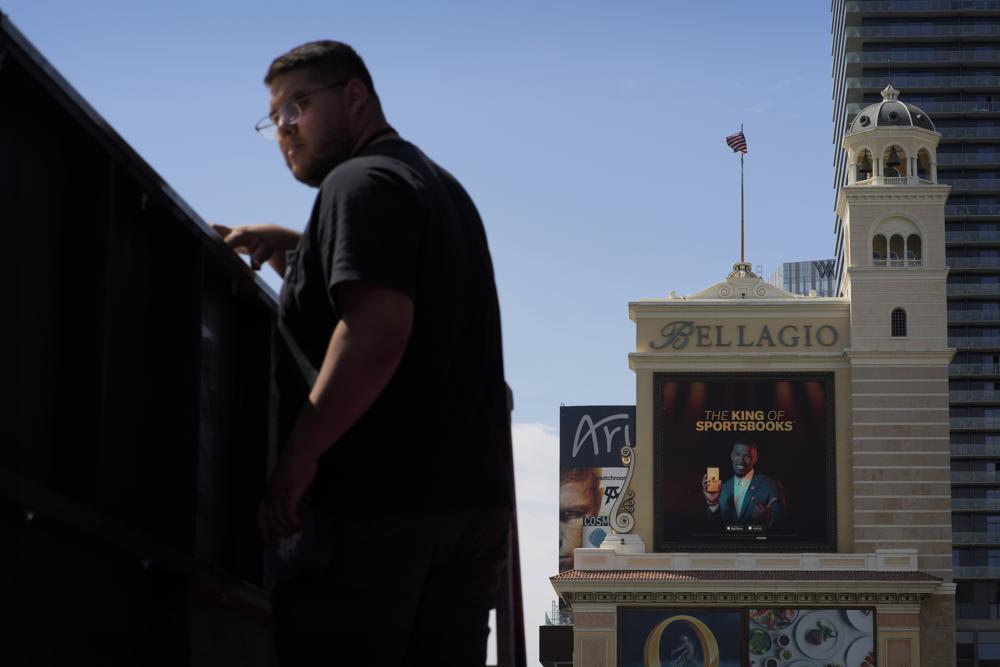 A sign advertises a sportsbook as a worker helps erect a stage in front of the Bellagio hotel-casino during setup for the NFL draft Tuesday, April 26, 2022, in Las Vegas. (AP Photo/John Locher)

Pietrangelo noted that 300 drones will circle the fountains on Wednesday through Friday and the fountains will be in use during the pre-draft festivities.

From the Bellagio, two billboards advertising sports betting, including one with the NFL logo on it, are in full view. As they certainly can be for the TV networks later this week. No one from the league seems uncomfortable with that scenario, instead emphasizing the importance of their “partners.” Particularly Caesars Entertainment.

“We really focused on our prospect experience this year,” Nanberg said, “and we are committed to Caesars Forum.”

Since the league turned the draft into a road show in 2015, it has held what in some (dull) circles is called the “Selection Meeting” in Chicago for two years; Philadelphia; Arlington, Texas; Nashville; and Cleveland. The general consensus is that Music City topped the charts with its presentation, shutting down Broadway for what has been estimated as close to 600,000 attendees over the three days. Thrown in were free concerts by Tim McGraw and Dierks Bentley, plus all sort of freebies (and other enticements) at the honky tonks.

Las Vegas might top that weekend, willingly shutting down a significant portion of the Strip and offering up Weezer, Ice Cube and Marshmello in concert. But the myriad other attractions in town — music, magic, ventriloquism, the tables and slots — could scatter visitors, something that didn’t occur in Tennessee.

“Las Vegas is the entertainment capital of the world,” Finkelstein said. “We know there are a lot of things going on in this town. They all get how to do a big event. We’ve gotten to towns where that was a little bit of a challenge with size. Here, they know what we are trying to achieve.”