Most of the five leading Republican candidates for Nevada governor who gathered Wednesday for a campaign forum in Las Vegas offered dire assessments of the state’s tourism-dependent economy, rising crime and struggling schools — and asked for votes for their visions to fix them.

“We want to have the best, well-run, state in the country,” said Guy Nohra, a Reno venture capitalist, drawing applause from among about 100 people at a Republican women’s club luncheon.

“But we don’t. We’re 50th in everything,” said Nora, who called his foray into politics the culmination of an American dream after his own teenage experience fighting a war in his home country, Lebanon, and his business ventures in the U.S.

The tone in the room was polite, calls to action were pointed, and fangs were out over the absence of Lombardo, the best-funded candidate among the 20 Republicans seeking the nomination in June to challenge incumbent Democratic Gov. Steve Sisolak in November.

“You need to know there’s somebody in this room who should be your next governor,” Lee said after placing an empty chair next to the speaker’s podium to conduct a self-answering John-versus-Joe monologue. “But it’s not Lombardo and it’s not Sisolak.”

Lombardo’s campaign spokeswoman, in a statement, called the two-term elected head of the Las Vegas Metropolitan Police Department “one of the most accessible elected officials in Nevada.” Spokeswoman Elizabeth Ray noted that Lombardo participated in previous candidates’ forums, said he planned to attend others and pointed to his fundraising lead.

“Voters know that Joe has leadership and experience they can trust, and that’s evident in our fundraising number,” she said.

Campaign filings submitted to the Nevada Secretary of State last week showed Lombardo raised more than $825,000 during the first three months of 2022 and spent about $522,000, with almost $3 million in the bank ahead of the June 14 primary.

Sisolak, by comparison, raised almost $1.6 million from January to March and spent $265,000, leaving him with more than $9.5 million to spend. His lone underfunded Democratic primary challenger, former North Las Vegas City Council member and Clark County Commissioner Tom Collins, reported loaning his own campaign $4,200 and having about $6,900 cash-on-hand on March 31. 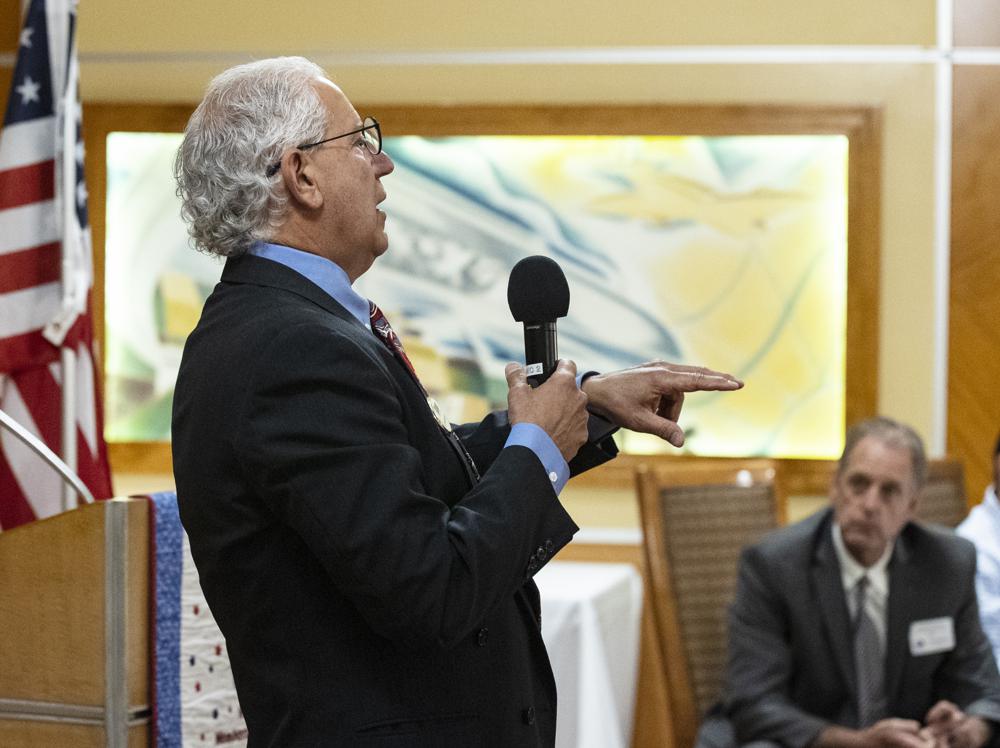 Among the Republicans, Simon is running a mostly self-funded campaign. He calls himself a constitutional conservative and reported he contributed all but about $10,000 of the $1.3 million he took in during the January-to-March reporting period. He spent $66,000 and reported having almost $1.25 million to spend. 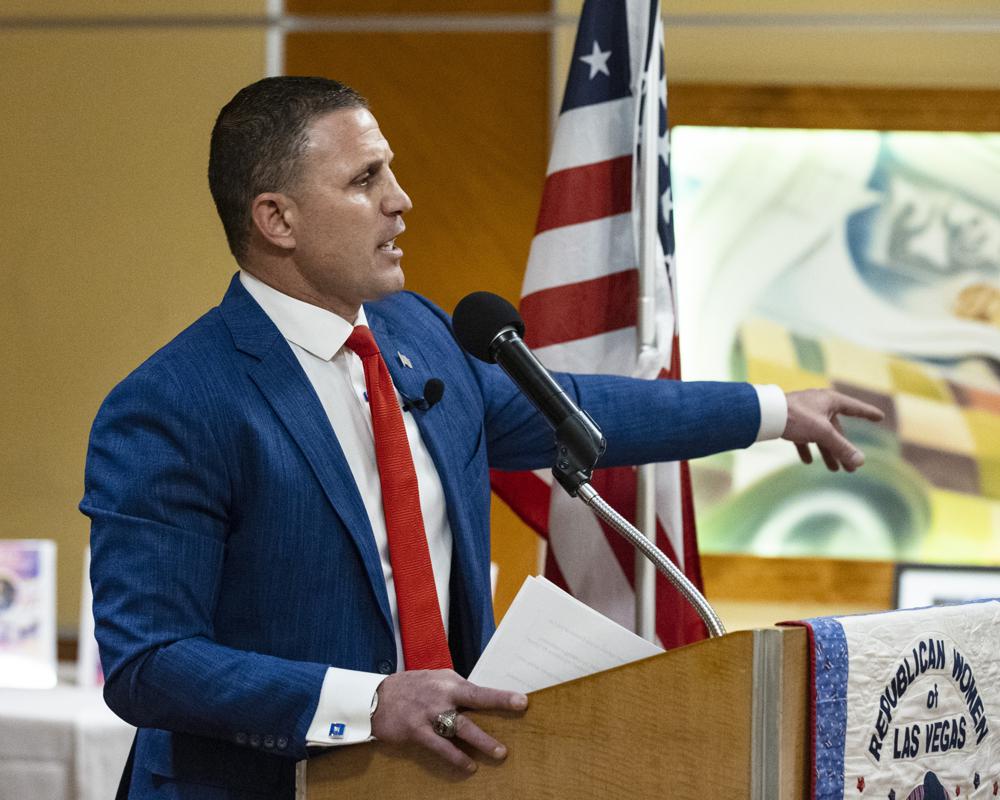 Gilbert, a Reno-based attorney who was outside the U.S. Capitol the day it was stormed on Jan. 6, 2020, parked his campaign bus parked outside the forum at Lawry’s The Prime Rib restaurant. He cited lawsuits he filed in Nevada against what he called “COVID insanity” of coronavirus pandemic mask mandates and a ban on treating COVID-19 patients with a malaria drug.

He drew loud applause for a pledge to “audit this sucker, the entire thing,” and promised to get rid of “transgender social indoctrination nonsense” in schools.

“You’re looking at the Ron DeSantis of the West,” Gilbert said, invoking the name of the Florida Republican governor who signed a law that forbidding classroom instruction on sexual orientation and gender identity in kindergarten through third grade. Florida’s so-called “Don’t Say Gay” law has become a culture war flashpoint. 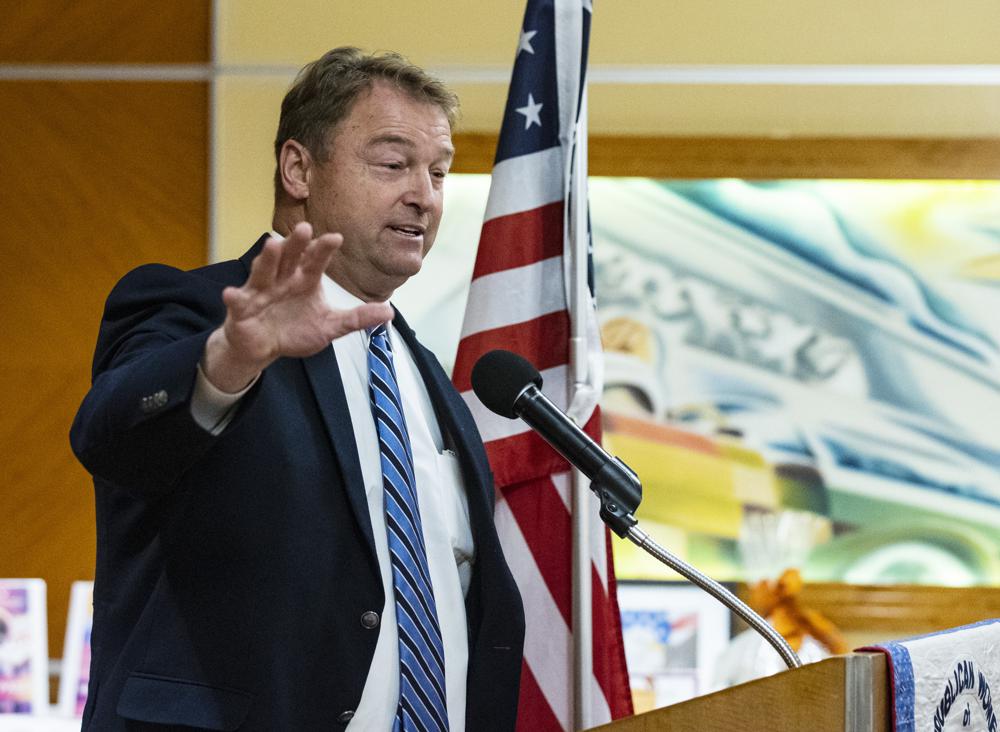 Heller, who lost his U.S. Senate seat to Democrat Jacky Rosen in 2018, previously served as Nevada Secretary of State and in the Nevada State Assembly and the U.S. House.

He said he had a “wonderful flight” from Reno to Las Vegas for the forum because, for the first time in two years, he didn’t have to wear a face covering. He noted that as a senator he voted to approve the Trump-nominated Florida federal judge who struck down the nation’s federal mask mandate on public transit.